Memory corruption vulnerabilities can arise from very benign programming errors and can lead to arbitrary code execution if exploited by a skilled attacker.

One byte overflows are no different and can be leveraged to craft fully fledged exploits against binaries linked to the Gnu C Library’s memory allocator, which is derived from ptmalloc (pthreads malloc), which in turn is derived from dlmalloc (Doug Lea malloc).

This technique was originally discovered by Google Project Zero’s team, as an updated version of The House of Einherjar, a NUL byte overflow exploitation technique dating several years prior to 2014.

As many modern heap exploitation techniques, it can be used to leak memory addresses by obtaining two malloc chunks overlapping the same memory region. One considered free and the other one allocated and attacker controlled.

The reader should be familiar with malloc internals before reading the following chapters:

Constraints and and NUL termination errors

One of the core differences in this version of the attack is the lack of control of the prev_size field. NUL termination errors are typical of string related tasks, therefore an attacker would not be able to provide a prev_size containing NUL bytes as they would terminate the string supplied prematurely, being restricted to impractically large values.

For instance, 0x0000000000000090 would terminate the string provided before overflowing into the size field.

Even worse, they might not be able to control the prev_size quadword at all , which might have program-defined value (such as a string suffix).

In order to achieve its goal, which is creating two overlapping chunks, an attacker needs to be able to somewhat control memory allocations.
Such degree of control over the memory layout may look unrealistic at first sight, but its actually a very common instance of any program running a scripting engine.

Start by allocating 4 consecutive chunks A, B, C and D:will of sizes 0x20, 0x110, 0x90, 0x20 respectively. Note that chunk D is only used to prevent consolidation with the top chunk and as such is not strictly necessary.

Free chunk B, the runtime will set C.prev_size = 0x210 and C.prev_inuse = 0. Chunk B is added to the unsortedbin as its size does not fit any of the fastbins (singly-linked lists holding sizes from 0x20 to 0xb0) 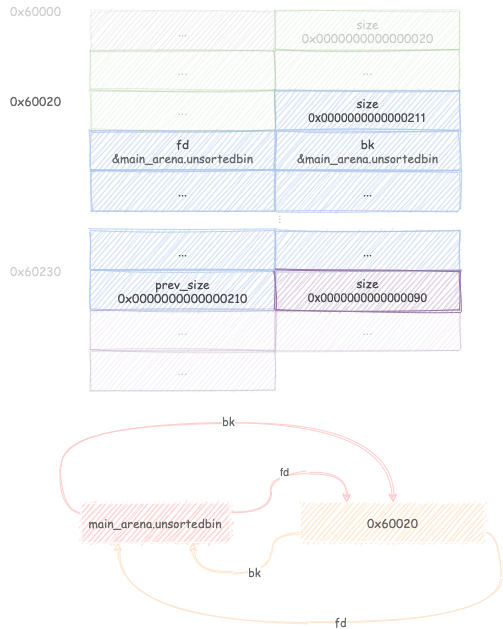 Now it’s the time to use the overflow bug at the attacker’s disposal: overflow into B and decrease its size from 0x210 to 0x200.
Keep in mind that C.prev_size is still 0x210 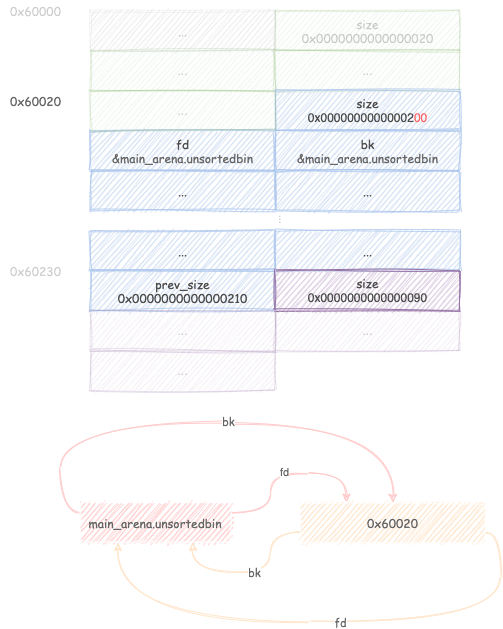 Request a chunk B1 of size 0x100. Malloc searches through its unsortedbin for a block of size greater than or equal to 0x100. Finding chunk B, it triggers remaindering, linking the remaining 0x100 bytes into the unsortedbin. 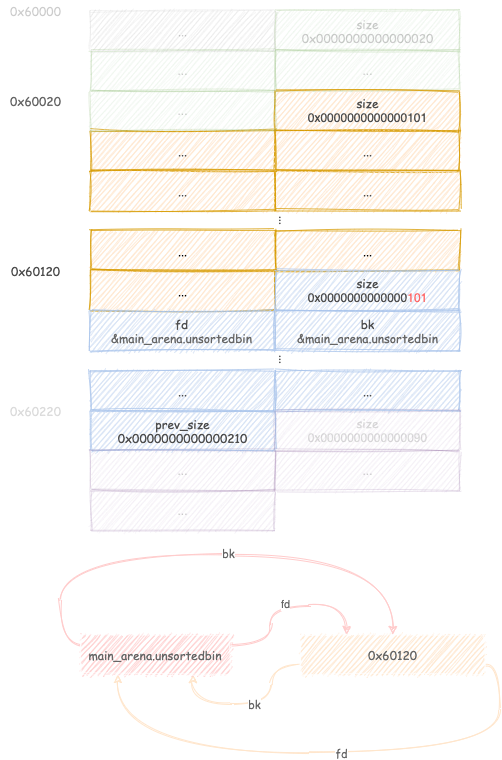 Request a chunk B2 of size 0x100: malloc tries to access the next chunk at address &B2+chunk_size(B2) and tries to set its prev_size to 0x100 and its prev_inuse bit to 1. Fortunately, this happens to be exactly 0x10 before C, therefore leaving its fields untouched.
Any requested size is fine, requesting a 0x100 chunk requests the last remainder leaving the heap in a cleaner state. 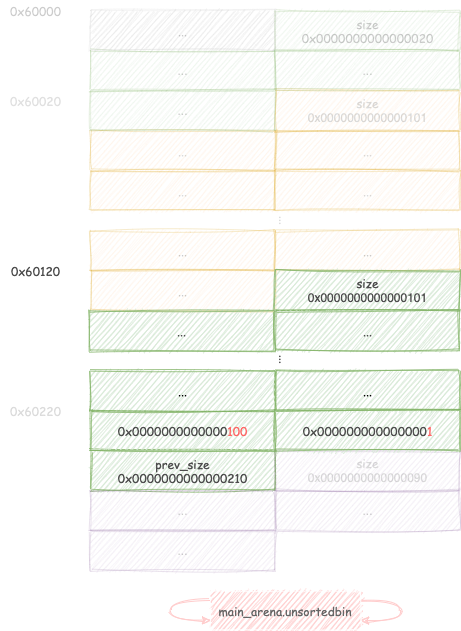 Free chunk B1, setting up a backward consolidation that starts from chunk C and goes all the way back to C1. 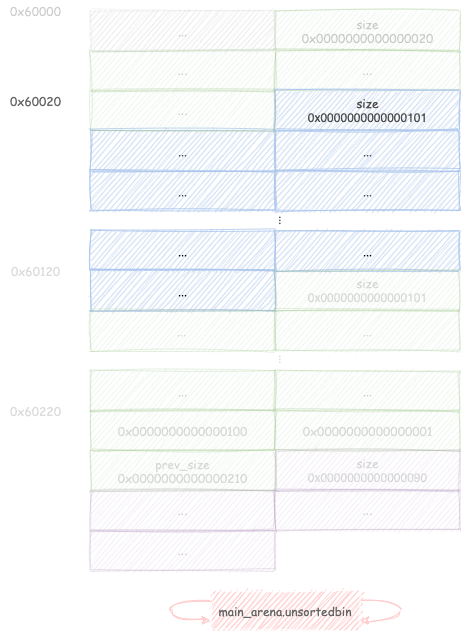 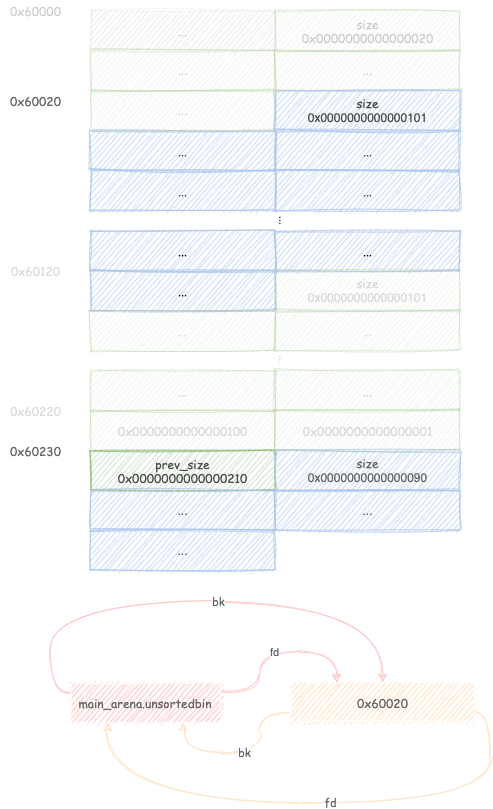 this triggers the backward consolidation and create a free chunk spanning from B1 to C therefore overlapping B2, which is still allocated. 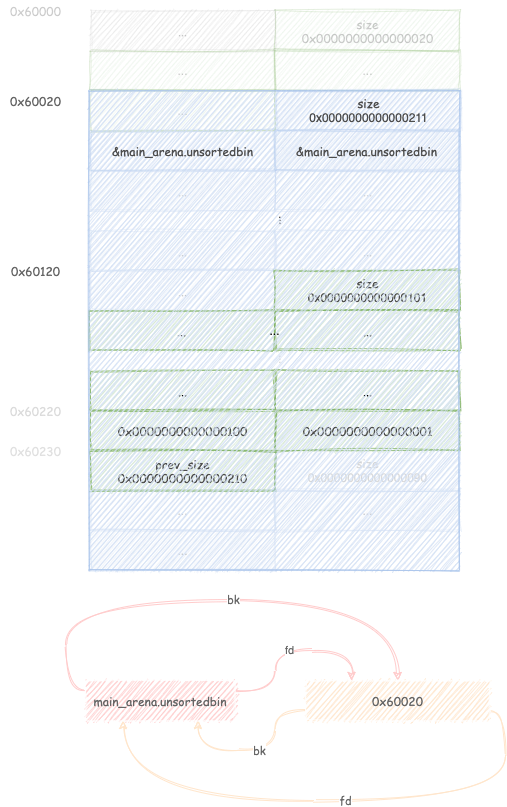 Allocating a big enough chunk will trigger remaindering once again and links the remainder into the unsortedbin, thus setting the first two quadwords of C to the address of the unsortedbin. 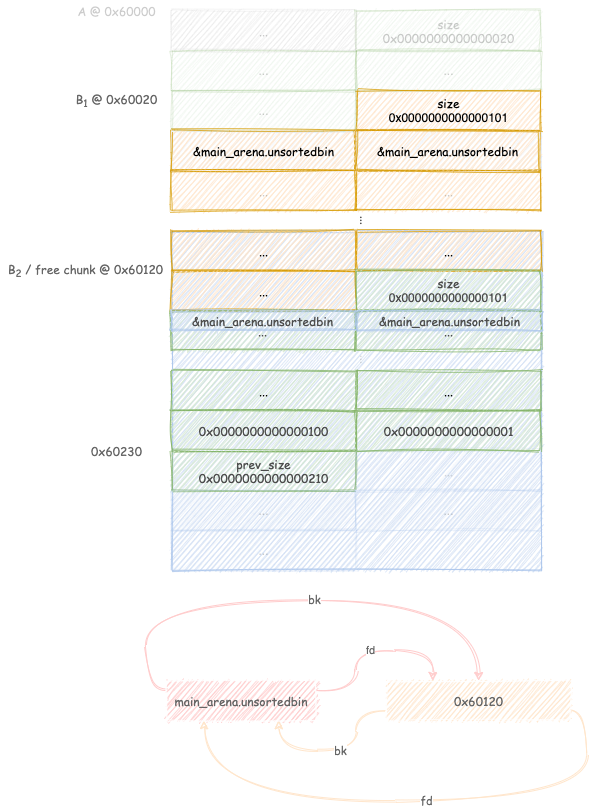 If this attack is used in the first stage of an exploit, usually an attacker leaks libc and heap addresses via this memory setup:
Leaking a libc address is as simple as getting an chunk into the unsortedbin (therefore setting its forward and backward pointers) and reading one of these values by reading memory from a chunk overlapping the one just free’d.