I’d like to be thankful to everyone in the community as a source of motivation.
Special thanks to Antonio and Tommaso for all the help they provided along the way.

Speculative compilers are designed to produce the most efficient code possible for a dynamic language. The core idea is to leverage the decades of optimization research done on traditional compilers. New challenges arise with dynamic languages because they lack type information that would otherwise make it very easy to understand and optimize code. JavaScriptCore’s speculative compilation is made of several optimising compilers stacking on top of each other, each one optimizing according to execution trends observed by the preceding one. The layered architecture also makes it easy to balance the latency/throughput tradeoff and to fine tune optimization on a per-function basis. For instance, it would be wasteful to aggressively optimize a short function executed a few times as it would be to interpret a hot function.

JIT bugs are some of the most complex ones that can be found in a modern browser due to the inherent complexity of the affected component. Despite not being beginner friendly, they are a great occasion to learn about compilers, optimization techniques and jump start a security research project. Their intrinsic, intricate nature, makes them hard to find both via fuzzing and source review.

Saelo from Google Project Zero disclosed a vulnerability in WebKit’s JavaScript engine JavaScriptCore’s DFG (Data Flow Graph) JIT compiler: a powerful and somewhat esoteric bug that can be leveraged to obtain an out of bound memory access. One of the optimization passes done by DFG, substitutes expressions incorrectly and confuses integers that are supposed to overflow with those who do not.

To learn more about speculation in JavaScriptCore the reader is advised to read Filip Pizlo (@filipizlo)’s article published on WebKit official website.
Moreover, Zon8.re did a fantastic job documenting the inner workings of JavaScriptCore’s compilation process.

Setting up a working debug build was by far the most painful part as after being stuck for days on weird compilations errors, I was told on WebKit’s Slack channel that I didn’t have the correct version of Xcode and macOS installed to compile JavaScriptCore. I therefore decided to work on WebKitGTK on Ubuntu machine. Readers interested in reading about a PAC bypass will be more interested in potential future installments of this blog series where I’ll port the exploit on a *OS platform.

The vulnerability being discussed is from 2020 and therefore requires a custom WebKit build. Shallow cloning allows to saves some space as a large chunk of history is truncated.

In compiler theory, common subexpression elimination (CSE) is a compiler optimization that searches for instances of identical expressions (i.e., they all evaluate to the same value), and analyzes whether it is worthwhile replacing them with a single variable holding the computed value.
~ Wikipedia

Performing the multiplication twice might be a inefficient, therefore it would be optimized as such:

This might be more efficient as y * y is performed only once and the value is loaded from a register. The profiler, the component that understands and creates an execution profile for code executed frequently, keeps into account whether it is more expensive to access memory for a value or perform the calculation multiple times. For instance, using CSE too aggressively could put strain onto registers, which are finite in number, which may in turn cause values to slip onto memory and possibly cause a slowdown due to frequent memory accesses.

In software engineering and computer science, clobbering a file, processor register or a region of computer memory is the process of overwriting its contents completely, whether intentionally or unintentionally, or to indicate that such an action will likely occur. ~ Wikipedia

Let’s see for example how a given node is consumed:

A node of type Int52Constant the clobberizer uses the def() functor to evaluate whether the node can be CSE’d. def() returns [memory] locations and they have to adhere to two rules:

PureValue means that the result of a computation will always be the same for a given input, in the same way in which a function is defined in mathematics (or a pure function in computer science).

The bug is in the ArithNegate case, the one used to handle the rapresentation arithmetical negation of a number. The problem is that def() does not take into account whether the number is speculated to potentially overflow or not, thus causing incorrect substitutions between the two.

Numbers that are speculated to overflow are said to be “checked”: they are runtime guarded, to bailout optimized code when an overflow is detected.

Note: the number discussed is signed, therefore an overflow occures when bit 31st MSB is set, not the 32th

A JavaScript user would normally expect that -2147483648 negated becomes 2147483648. An engine would normally bailout if it detects that the program executed overflowed trying to rappresent a number out of range. Negating INT_MIN yields a number greater than INT_MAX (2147483647) and could potentially go undetected if CSE confuses a checked intger with an unchecked one. Morespecifically, in JavaScriptCore negating INT_MIN returns the following:

The bug being discussed can be summarized as a substitution that type confuses overflowing integers. By itself, this is only a correctness issue and not a security one. A key mechanism to be paired with a CSE bug to cause a security issue is IntegerRangeOptimization to remove bound checks.

Math.abs(...) correctly sets the node’s type to ArithMode::CheckOverflow and instructs the profiler about idx always being positive. The negation that Math.abs performs is later substituted with an unchecked one. Accessing an array at index -2147483647 is not that useful in itself, but it can be easily solved by causing an overflow and obtaining a positive integer.

Successful exploitation consists in executing arbitrary code in an attacker controlled memory region. This is usually done by crafting JavaScript objects and using them to access memory locations by controlling the backing store pointer (aka the pointer pointing to where an array writes).

For convenience sake, attackers have used historically ArrayBuffers: a datatype that allows reading and writing raw bytes. This era came to an end when in 2018 Apple introduced the Gigacage, a security mitigation that isolates ArrayBuffers’s backing store pointers in a 4GB region, rendering them effectively useless for exploitation. Attackers have since pivoted to JSArrays because their Butterflies store raw, non-caged, floating point values.

In 2019 Apple introduced StructureID Randomisation in an attempt to stop attackers from crafting objects. This mitigation proves to be rather ineffective, as we will later see, since most out-of-bound access bugs can be used to leak a valid StructureID.

Given a constrained ability to overwrite a memory location, the first goal to be achieved is a stable out of bound access.

Let’s analyze the memory layout, which happens to be very stable.

Note the use of noCoW, to prevent the creation of CopyOnWriteArrays (for more on Copy-on-Write). 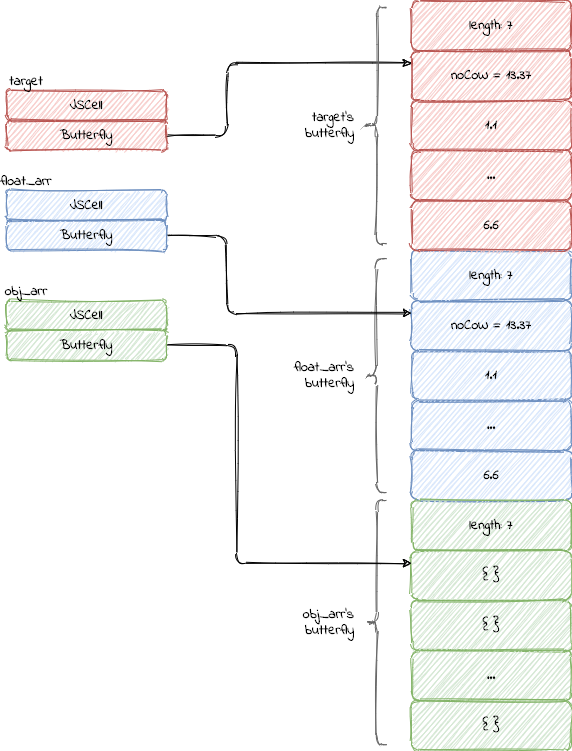 The butterflies are contiguos and as such, an out of bound access may allows access to the following ones.

The previously discussed trigger function executed 1000 times, this is a useful trick to increase stability by attempting triggering the bug multiple times rather than a single shot attempt.

After the out of bound access, the memory layout changes as follows:

For debugging purposes, the following snippet performs sanity checks and exits in case of errors.

The two primitives are built by having a float array and an object array overlapping on a memory location.

Given the bug has been triggered, the two primitives are defined as follows:

Another sanity check used to assess the correctness of the exploit is the following one:

Each JSObject has a header of type JSCell.
The header looks as follows: (file: Source/JavaScriptCore/runtime/JSCell.h)

m_structureID is an identifier for an out-of-line (meaning, non inlined) object used to describe the shape of the JSObject.

These shape descriptors indexed inside the StructureIDTable. Each valid entry has 7 entropy bits which successfully cripple the ability to guess a valid StructureID, thus making memory spraying useless for this purpose.

This puts a novice against what seems to be a catch 22 situation: crafting an object requires a valid StructureID, but leaking a StructureID requires a properly constructed object.

Fortunately neither of these two assertions are true as it is possible to use objects with invalid StructureIDs, and its possible to leak a StructureID with a semi-faked object.

Attackers have soon after figured out possible strategies to sidestep this situation, coming up with a general bypass based on addrof, fakeobj and JSC specific behaviour. This bypass makes use of codepaths that don’t check StructureIDs such as getByVal.

Since canGetIndexQuickly doesn’t check for valid StructureIDs we can create a fake object with an invalid ID and use it to read a proper one. The header we want to leak is the one used by a JSArray with indexing type ArrayWithDouble, so we’ll create one:

After creating an array to leak the header from, its time to craft an object with a custom header and butterfly:

Leaking the StructureID and allows having a fully controlled, properly built fake_arr

Now that the attacker controls a JavaScript object that can modify the metadata of another one, rw_arr in this specific instance, they can decide where the latter reads from and writes to:

fake_arr[1] sets the memory address rw_arr uses for reading and writing. For example, an attacker may try use rw_arr to read from 0x4141414141414141 and crashing the process at said address.

Obtaining code execution is a matter of obtaining a RWX memory area and overwriting it with the desired shellcode. Further information is left to the source code itself. 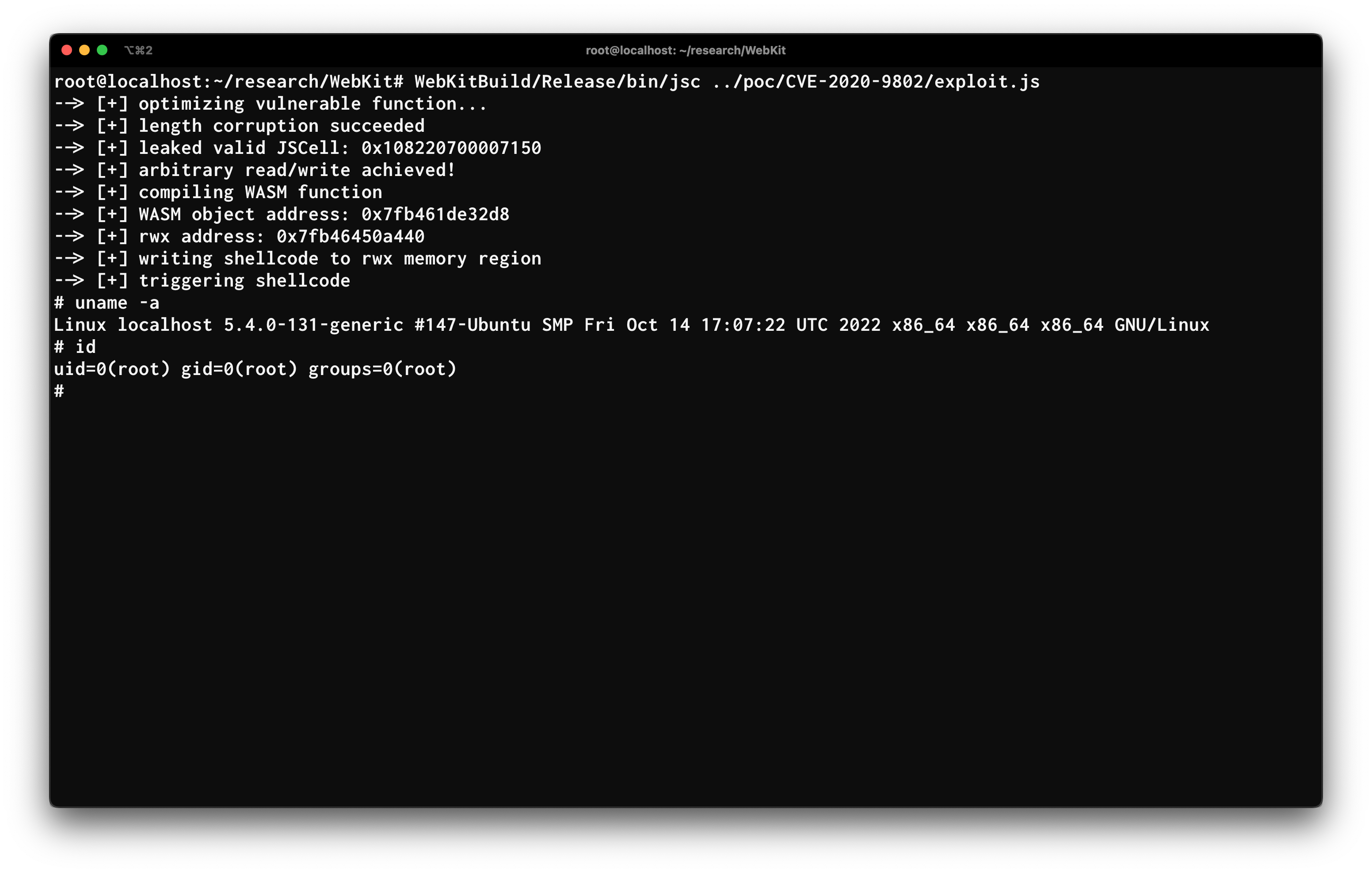 The full exploit can be found on GitHub.

Leaking rwx_addr occasionally fails and returns 0x7ff8000000000000 causing the process to crash. Further work can be done to increase reliability.

This article is yet another example of the dubious effectiveness of security mitigations, as even a novice exploit developer can sidestep them with little to no effort (StructureID Randomisation and Gigacage specifically).

On a different note, whilst trying to understand the bug, I spent several days wondering which alternatives to bounds-check elimination were feasible. This might as well be a year long research project, but one worth pursuing.