I came across an article about a phishing attack that installs Java malware upon success. This reminded of Wirenet, a cross-platform malware that made me wonder whether there was a link between the two.

This was one of the first, if not the first committed attempt I made in applying reverse engineering techniques to real world software (a malware in this case). Despite a superior familiarity with Windows internals (rootkits specifically), I figured this would be a good chance to acquaint myself to Linux.

The analysis is pretty low level, it goes over specific instructions and puts more emphasis was put on the how (i.e. techniques used) rather than the what (i.e. results obtained).

The talbe contains some high level information about the sample

One of the most important things about the binary is that function names were not stripped, which made the entire process much more smooth

Wirenet, being a baking trojan, features a keylogger among the spying functionalities, whose decompilation process is shown below

Line 2 - 3 call XOpenDisplay which establishes a connection to the X server, line 4 - 7 do error checking and jump to loc_8055532 in case XOpenDisplay returns a non-zero value. Otherwise a variable called KeyLoggerState is set to 2. As the name suggests, it represents the various states in which the keylogger can exist, it is used mostly for error handling purposes and is not of much interest.

Next, these instructions are executed

Line 2 - 4 - 6 load variables addresses into eax, so that line 3 - 5 - 7 can push those values onto the stack and call XQueryExtension. XQueryExtension determines if the named extension is present. Line 11 cleans up the stack, line 12 - 13 check if XInputExtension was present.
If the function fails KeyLoggerState is set to 3 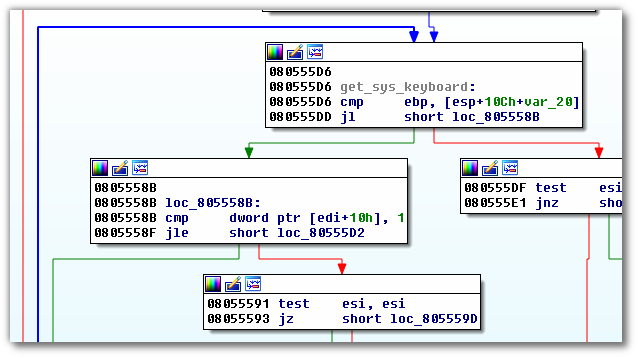 Every reverse engineer races against mental fatigue, and it is fundamental to be able to dissect the unimportant pieces from the relevant ones. This kind of fatigue can be felt even when reading dense material and as such I omitted parts I deemed as not important to cover.

This part is pretty simple, a string AT is passed to _strstr along with a variable called haystack, looking for the first occurence of the former in the latter. To put it simply, the call looks something like this:

Line 5 cleans up the stack, line 6 stores the haystack in edx and line 7 checks _strstr’s return value. If it is zero execution jumps to loc_80555D2 which simply ends the loop by incrementing the counter.

If an occurence is found there’s another search, this time using System keyboard as needle.

The interesting part of this branch is over, it is worth however mentioning that under some conditions a variable called KeyLoggerState is set to 4.

Let’s go up the abstraction ladder and let’s ask ourselves what happens if the previous check happens to be passed. Here lies the heart of the keylogger:

As the name suggests, after finding the device rappresenting the system keyboard the malware tries to open it with XOpenDevice and return a XDevice structure which are defined as follows

There are two conditions two branches that set KeyLoggerState to 5

The function either fails

or the field device_id (offset [eax+4]) is zero

The executions continues to the next function. I won’t go over in detail to how variables are passed to the function as it would be somewhat redundant

XSelectExtensionEvent selects an extension event and is defined as follows

The KeyLoggerState variable is now set to 0

At this point, we found the system keyboard device and opened a handle to it. All is set and the malware can start logging keystrokes

After an event occures and XNextEvent gets executed the following instructions fill a XKeyEvent structure and pass it to LogKey. Line 34 jumps to the previous code snippet (a never ending loop).

At a high level, the keylogger works as follows:

The implementation of the keylogger is quite simple and lean, making it easy replicate it at the cost of its ability to conceal itself, which is completly absent.
The decompiled source code can be found here.